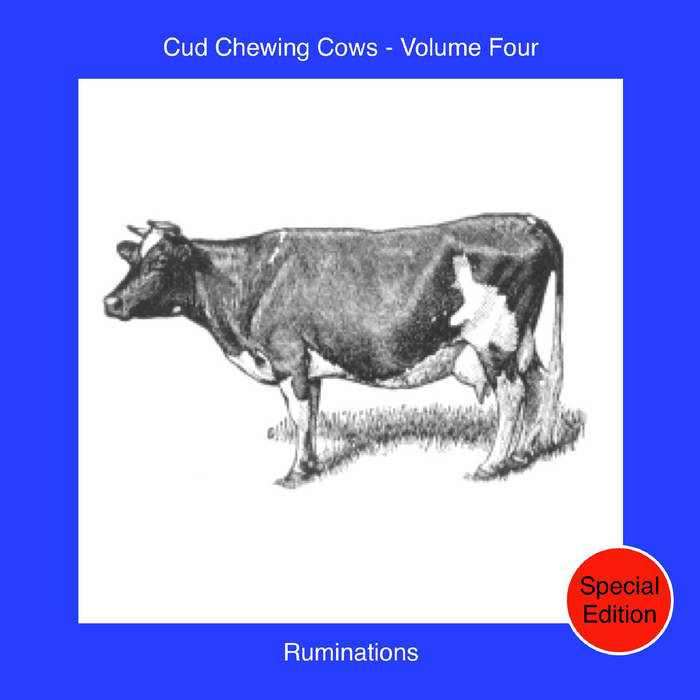 “Greener Pastures and a Greener Planet!” That may be interpreted as one of the many global themes on the Cud Chewing Cows’ Volume Four - “Ruminations”. CCC (or 3C, as they are also known) are definitely thinking globally now.

The record begins with “Yasmin”, for the first time, the voices of Women are ‘herd’. This short introduction teases what will be an engaging multicultural, multidimensional experience in time and music.

This very sweet melody and vocal loop leads into “Irish Frost”. Apparently the 3C can “dideei-dideei” with the best of them. Be carried away to a ,beautiful land of rolling hills, green pastures and happy Irish cows! The story, like the CD face plate artwork, is obviously told from their perspective.

From Ireland, the Cud Chewing Cows take us to the continent where the first man-made music was ever likely heard, "Africa". Using voices, mallets, percussion, a Kalimba and a Marimba, Harry Hereford and Big Bobby Brown-Swiss take their melodic and percussive skills to new heights. If you listen very closely you may hear the sounds of life on the Savannah.

While in the region, Cud Chewing Cows take a short visit to the Holy Land of Israel with their renditions of the Middle East Grazin’ craze “Klezmer Cow”, and if that doesn’t make you ‘Kvell’ and “Challish”, listen to “Bovine Bar Mitzvah”.

From there it’s just another stop on their whirlwind tour of the Old World with “Istan-bull”. The incredible Turkish Oboe takes us there on the first note. All we can say about this is “Wow!” or “Holy Cow!” A Calm Riq and a Spicy Saz with Turkish drums, flutes (very Bond-esque, like the title song from their Volume Three - “To Marrow Never Knows” entitled “To Marrow Never Knows”). More Oboes and Turkish Ouds play. This piece is a voyage to another place and time.

Not to leave their huge dance fan base in the dark, the very funky “AC Man” appears as a refreshing local blend of dance, funk, groove and Australian aboriginal tones as the Didgeridoo makes its first (albeit brief) Cud Chewing Cow appearance. This tune totally grooves along with a funk synth, world guitar, down tempo Piano, ‘British Invasion’-style Bass and 3C’s classic Brass section, pumped out by the incomparable Henry Holstein and Jim Jersey (who apparently serves double-duty dabbling in Brass as well).

Back to Africa, with vocal harmonies, percussion, Marimba, a Harp, Shakers, a Flute and yes, a Cowbell, it’s time to dance with the Ndembu for the riches their Cattle Herds offer them in “African Skies”.

“Farmer’s Market” takes a very pop turn and as quickly as the bass and drum arrives, the tune ends.

Without pause, it leads you back to Turkey, to a small village known as Didem. Therein, lives a woman also named “Didem”. This song is for her on the occasion of her wedding.

“English” is a melody that takes us back to the forested landscapes of Auld England with Harps, Flutes, Lutes and light drumming.

FYI - “English” can be heard under the name of "English PD" in the soundtrack to the Space Viz Production “Planetary Defense” spaceviz.com , which was nominated for the prestigious Clarke Award in 2008 in the UK. Fellow nominees included Sir Richard Branson and Stephen Hawking. The Clarke Awards, named for eminent science fiction author, Sir Arthur C. Clarke, are called the Oscars® of British Space Achievements and the Cud Chewing Cows and pleased to have been a part of that very worthy endeavour.

In a strange nexus of real music and loops, using club beats and tunnel trances juxtaposed with monasterial chants, “Gregorian Sphere” is a bizarre trip to a distant hillside, where cows give thanks to prayer and vegetarianism.

Back to a western cocktail lounge, 3C grooves with the best of them in "Groooovy". An upbeat piano, light latin bass and a simple red wine beat leads into a very progressive solo which oscillates between itself and musical bliss (hard to tell which is which). Definitely more great driving music by Bob and the ‘Herd’.

Time to dance! “Don’t Steer Me Wrong” makes everything fun. Driving, raving, partying, exercising, eating, making love, dancing or simply old fashioned grazing! With this song, the Cows’ have taken their beats to a whole new level. Sometimes you just get it right. This one is heavy on the dance while Bob is scat-bopping throughout. Made to Play Loudly!

Time to breathe. “Emerald Isle” is a short ‘reprise’ of “Irish Frost” and tones things down a bit while the ‘Cows’ get ready to groove on the bass driven “Mad Earth”.

The album culminates and completes itself with “Smoothe Jam”. For fans of Cud Chewing Cow classic grooves, this will definitely excite you. A slow introduction of the main instruments, a gentle break out on drums and then it all comes together with a little organ and a lot of fun. Still building the drums and percussion, never over-bearing, switch up in interesting and fun ways to keep “Smoothe Jam” fresh and interesting throughout.

The Bonus section on this album is loaded! Beginning with “Didem’s Trance” we take a dance-trance-trip at a Turkish wedding. Like “Didem” which appears on the regular portion of this album, this song is awesome, the difference being its focus on a western dance-trance rhythm.

In “Ballad”, obviously a demo recording by Bob, once again shows his Lennon-esque influences, as his heavy-bass-hand piano drives the rhythm and passion.

This is followed by four 14 second Movie Scores, all similar, yet the different. Listen for the subtle changes in each. The Cud Chewing Cows show that they can do more than Pop. They have participated in movie soundtracks and it seems as though their musical expansion is limitless. Bob, in "Playtime", another demo, plays guitar, piano and sings a verse or two while cracking himself up. Great fun!

Cud Chewing Cows are working on a collection of some of their fun tunes, entitled, Cud Chewing Cows - “Choice Cuts”. ‘La piece de resistance’ on that album is the never-before-officially released version of their Jazz hit “Satchmoo”.

Listen (watch) for it!