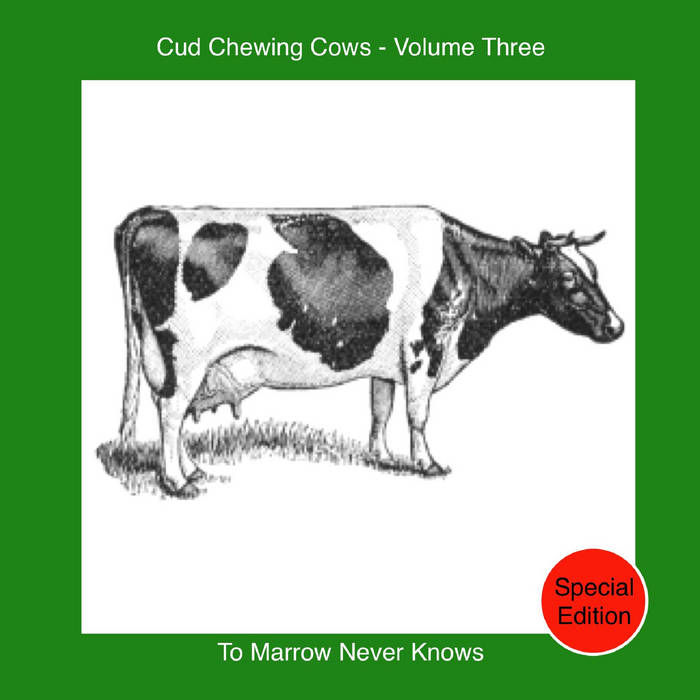 The fan reaction to the “Cud Chewing Cows” (CCC or 3C) has been sensational. CCC seem to be reluctant messengers of happiness and contentment. Reluctant in that they never seem to comment on bad or sad states of affairs and rather concentrate on the impulsiveness and creativity inherent in all of us. This positivity is very attractive and magnetizing.

The opening track “Pasture Eyes” is a combination of an acoustic guitar vamp with layered vocal harmony in the form of humming and a kazoo playing the theme.

Then after a short pause the Cud Chewing Cows start you driving down the road of contentment as some bass, driving drums, piano and flute introduce you to bongos, trumpets and saxophones that seem to get the party started in "The Rise and Fall of the Rumen Empire".

Since you’re now driving contently, hopefully on a country road (or a highway that leads to a country road), you feel as though you’re “Rolling in Clover” as a smooth piano, bongos and high hats, jazzes you through the fields of time.

“You Churn Me On” butters up the situation further as cows with happy hooves feel down-home and get cooking with a bass, electric guitar, shakers and a rhythm section that alternates with a calypso groove using steel drums and some happy high hats which comes to a happy ending sipping lemonade on a porch front with a fun banjo.

The hit single “iMLK” makes it’s album debut on “To Marrow Never Knows”. The “i” has a triple use. It's 'milk'. It is also used symbolically as the “i” as in “I have a Dream” as well as the portable 21st century music “i” as in i-everything”. MLK is direct reference to Martin Luther King. It is his voice, speech and dream that prevails in this international hit sensation. Subtle backgrounds are singing in both English and French, denoting the internationality of MLK’s dream. With this, ‘we’re free at last’. “Ahh-ahhh!” Walking bass and shuffle drums lead into a little guitar, keyboards and before you know it, you’re on your “Haystack High”.

Another simple Cud Chewin’ classic, “Cownt on Me” is a fun-loving guitar, kazoo and a lot of happiness. Bob is strumming and jiving in his own inimitable fun-loving way.

“Cowboy” first premiered on a web site demo and wowed audiences the world over. Often found in underground raves “Cowboy” is short, simple and very dance-able.

An extended version of “Cowboy” (which will be released on Cud Chewing Cows - Volume Three - "To Marrow Never Knows") can also be heard on the soundtrack to the Space Viz Production "Planetary Defense" under the name of "New Song".

Cud Chewing Cows are pleased to have been a part of "Planetary Defense" and wish Space Viz continued success!

A Christmas version of this song entitled, “Cowboy Christmas” is featured as a bonus track on the Special Edition of “To Marrow Never Knows”. “Down Home on the “MM” gives that southern feel with fiddles, a washboard and drums, Bob singing, a Dobro guitar and a piano. Written originally for Bob’s dog and sung from her perspective, the words seemingly switch over to Bob’s perspective as he reminisces on the Sunny dog-days of Summer and his completeness and fulfillment with his (and her) ‘love’.

A switch from the happiness, though short lived, as a haunting bass, brings in an orchestra, piece by piece, in true “Cud” style with "No Flies Zone". Within 36 seconds the wah-wah and drums sneak in introducing a further instrumental build up and an orchestral counter point that is unbelievably good, and almost as suddenly, just as it takes you ‘there’ it comes to a denouement and conclusion with a flute and a guitar, in a mysterious riff.

After shaking things up, get ready to dance with “Prime Mover”, another underground rave hit which will make for a few of the finest escapist moments on the album. “Prime Mover” is a dance trance that will put you in a ‘haze’ by simply feeling good. Bob and the boys have taken their underground side to a new level here.

Now that the party is started, “Gravy Train” goes full steam ahead, juxtaposing that down-home sound of “Down Home on the ‘MM’” and “You Churn Me On” with a Dobro, guitar, a Flute, and and a fine dance rhythm reminiscent of other tracks such as “Prime Mover”. This piece is interesting in it’s musical combination of Northern, Southern, Eastern and Western influences.

Continuing with a bit more of an Eastern influence is “Growth Hormone”. The track combines bongos, flutes and shakers and grows to enormous proportions in a very short period of time.

The original album ends with the title track off the album, “To Marrow Never Knows”. More feel-good driving music. A driving bass and rhythm section and a Bond-esque flute combine with a synthesizer that sounds like an old Moog that adds a mysterious feel to the album, leaving you wondering “what’s next?”. The answer from the Cud Chewing Cows is “To Marrow Never Knows”.

You may ask, what happened to Volume Two? You may ask.

Listen (watch) for it!