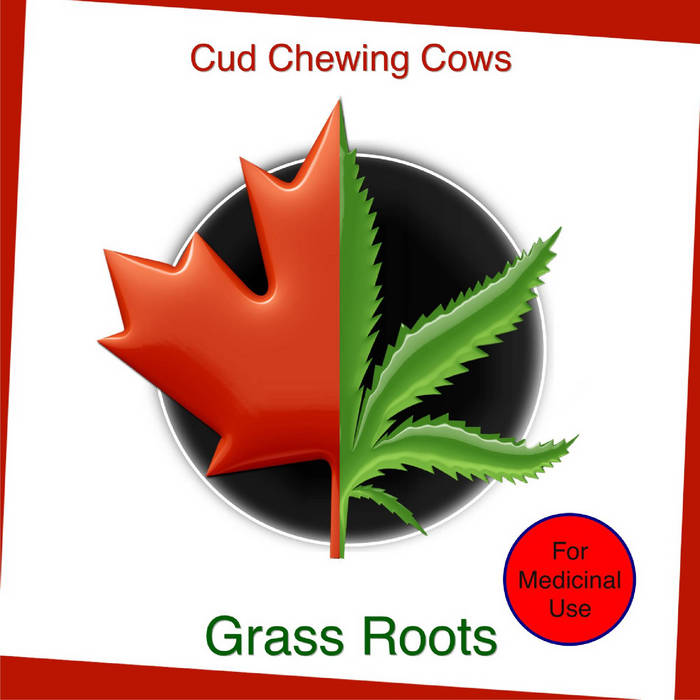 Cud Chewing Cows - “Grass Roots” picks up where Volumes One, Three, Four and Choice Cuts left off, with a fantastic collection of toe-tapping, worldly, funky, groovy and all around happy music, and it, like it’s predecessors, makes for great repeat listening, by all ages and all cultures. Hay Fever - Fièvre des foins is a very upbeat country influenced Hay Ride through the meadows. Rolling hills, patchy blue and white skies, sweet smells and good times. Fièvre des foins means Hay Fever in French.

A strummed acoustic guitar and a short-lived upbeat piano roll intros the album and song. A Beachside Electric and Drum machine bring in the key to this song, the Southern Banjo. Listen for that Southern Fiddle. An interesting break features a Beachside Steel Drums and another great Piano Roll. Remixing these Piano rolls the band blends in a great RnB Horn Section and the rest is ‘Cud Chewing’ history. Before you know it your toes are tapping, the dog is licking herself and all is well in the brain.

A change of beat and a change of pace happens swiftly with a Brazilian Bossa Nova swing entitled It’s a Beautiful Day (Yeah, Yeah, Yeah). Here Bob (Piano, Guitar, Vocals) and the boys bring out the girls (Yeah, Yeah, Yeah). While they groove on their Piano, Drums, Bass, Latin Horns, Guitar and Shaker the girls get their ‘Yeah-Yeah’s’ out and so does the listener.

With no time to lose the band put in an eight-second ‘stinger’ which they worked on with Space Viz for their newest documentary, “Space Capsules”. Delight to the eight-seconds of Space Capsules (Stinger). It may be short, but it’s rich with content: Bass, Drums, Guitar, Shaker, Dobro, Keyboards and guest vocalists Cody and Darcy.

Away From You has a 70‘s “Steely Dan” feel to it and features guest vocalists Seth Shepherd and Devon Dew as well as the band jamming it out with their favorite toys, Piano, Drums, a Motown-sounding Bass, Violin and a Bluesy-Jazzy Organ.

Black Holes title is about a feeling of swirling and spinning down a vortex, forever falling. It’s both imagery and heartfelt and features vocalists Cody, Janice, Devon and Inara. Of course the band soothes it all out with their Acoustic Guitar, Violin, Big Bobby Brown-Swiss on High Hats jamming it out with an Indonesian Chi Gamelan played by Harry Hereford. The two sounds together with the voices are magic.

Green Grass, Orange Trees is a Trance-Romp through Techno-Land and is destined to be found in more works by Space Viz. It’s short, percussive, Bassy and Trippy. I’ll keep the ending ‘zipped’.

60 Wonder is a demo that Bob (playing a Smokey Clav) self-recorded for the band as an idea for a soundtrack theme which is both Bond-esque and 60’s-sounding. It’ll likely reappear in a future work more developed by the band. But that doesn’t take away from the ‘wonder’.

The Sloth and The Lady Bug is another Bob-produced vision. This time Bob dabbles with a Cello and a Violin in this short Classical piece. The technique used here is an homage to the technique used in the classic music story “Peter and the Wolf” (by Sergei Prokofiev, 1936) where each character has a musical theme and a particular instrument. The Sloth is represented by the Cello, hanging in the tree canopy which is represented by the Violin, and The Lady Bug is represented by Bob and Jim’s Pizzicato Strings. This short classical can be played over and over and never seems to grow old, just more inspired.

“All aboard the Country Trance!”. Beginning with a Dusty ol’ Dobro Guitar and a Drumset, a Bass-line creeps in shortly thereafter mixed in with more Guitars, Dobros, even more Bass, a Double Bass, a Cello, Violas, Violins and more Trance-inducing effects. If you like to dance and trip, this is the place to be. This was a number previously produced by Cud Chewing Cows and only released on disc, here and now. It originally appeared in a ‘Doglight’ advertisement produced by Space Viz (one of our first co- productions).

Next up, a “Classics-on-45’s” sound and a splendid mix of Bob’s classical training. Beginning with a Big-Hair Bass, a Funky Drum, a Tamburin, an Electric Piano, a Toy Piano, a Trumpet and a guest Vocalists (Bailey Melody and Andre Allover), You and Me Forever Walking is off to another great start. Interestingly a French Horn, Clarinets and a Flute break it down with some counterpoint. This goes back and forth in a musical undulation that plays both sides of the creative and pragmatic brain and induces a feeling of Nirvana. Still, a lot less expensive than a trip to the Orient.

Perhaps 3C’s grooviest number on this album is Hey Hey. The Bass line sounds a lot like Steeler’s Wheel, “Stuck in the Middle With You” mixed with a vocal reminiscent of Moby (by Clyde Cowman) blended with the groove and feel of the “Cows”. Beginning with a Down Home Dobro Guitar, that fantastic Southern Bass (played by none other than Henry Holstein), an Acoustic Picked Guitar, a Cheerful Mandolin and a Down Home Banjo “Hey Hey” gets sparking with the addition of a Southern Fiddle, a Southern Drumset and that awesome vocal.

Switching gears yet again, Bob plays Melancholy Ghee on his Grand Piano. This is another short demo for the band which may get developed later but for now sounds on it’s own as “Melancholy Ghee”.

Herd on the Highland is a blend of Scottish, American Indian and Eastern Indian music. Weird, wild and it works! Bob is “Ohming” like an American Indian while Sitars and Bagpipes play (another interesting musical choice).

Once the listener is induced into a state of relaxation, the song gets even more incredible in the last 45 seconds which explode with Eastern Indian sounds (an Udu, a Shaker, a Raga Sitar, a Sanskrit Tanpura, a Raja Sitar, a Percussion Groove and the seldom employed ‘Fade Out’).

She’s My Dog For a Day is a number sung by Bob and played on an Acoustic Guitar. It’s short, sweet and dedicated to Bob’s dog.

The 3 Bonus Tracks on this album include the never-released Uhn-Ha (Piano, Drums, vocals by Andre Allover, as well as African Marimbas, a Jazzy Vibraphone and an Acoustic Guitar); Version 1 of Herd on the Highland (which has a completely different last 45 seconds and no Fade Out); and another version of She’s My Dog For a Day, sung by Bob (it has a little more echo on the voice than the first version appearing on this album).

The Hammer and The Relentless from the Boston band Malleus stop by for a chat.